Morpeth Harriers New Year's day 11k road race was held today. Weather was good. Sunny with no wind and surprisingly mile for this time of year. This race is free to Harriers members and I put my name down around 2 months ago knowing I would have to take it easy on New Year's eve! We were asked if we could provide some food for after the race to raise some money for the club and a duly whipped up my homemade flapjacks to help out. They're good, courtesy of a recipe from River Cottage! Thanks Hugh!

I have had a lingering cold for 2 weeks now and it was at the stage where everything that came out of the nose was green and phlegmy. Otherwise I felt ok if not a little tired from the festive indulgences. 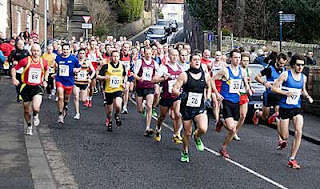 The race started with a quick tempo as usual and I tried to hold myself back. First mile was 5:30 which I feared may catch up on me later! Nevertheless I was positioned around the top 15 and the field was becoming widely spread out. Mile 2 was slightly slower but was aware that mile 3 was going to be tough heading up Mitford steads. I've had many sessions up the steads with the training group but not in a race. By the time I reached the top I was beginning to flag.

Turning the corner at the top I was grateful for the encouragement from the home spectators. From that point on it was flat/downhill for the last 3 or so miles. I began to get into a rhythm again and speeded up, one spectator informing me that I was 13th with quite a gap behind me. This eased the pressure and enjoyed the run back into Morpeth.

I reached the finish, calves quite tight by this point, but maintained my position and very happy with 39:45 - checking the GPS I reached 10k in just under 37:00 - I ran faster at the Derwentwater 10 miles! The nose was cleared temporarily.