Met a few lads over in the Lakes to do another recce of the Lakeland 50 route. Having done the Ambleside to Coniston section back in December, we aimed to complete Mardale to Ambleside via Kentmere on a cold, snowy day. Around 14 miles on the actual route, but we had to get to the start first. In total the navigation experts calculated around 18-19 miles in total.

We arranged to meet up at Kirkstone Pass early doors, hoping to bag a few hills on the way to the start at Mardale. Had plenty kit but inadequate gloves let me down especially on the tops where the wind chill factor must have been -10. Numb, painful fingers for a good hour or so. Not pleasant. There was a covering of snow on the hills, several inches in places but due to the cold temperatures the snow had formed a crust and was quite firm to run on. Climbing wasn't too bad but the descents were quite tricky having to negotiate carefully to avoid any injury. I was grateful that a few of the lads were clued up on the map reading front, a skill I need to work on.

We reached the start of the section at Mardale after two hours of climbing and descending, thankfully the fingers warmed up quite quickly as soon as we reached the valley bottom.
The route was undulating as expected but was akin to running on a dry river bed, rock and more rock. Going to be hard on the feet and the quads. We passed some remote areas and areas I'd never been before which was refreshing.

We reached Ambleside after around 5 hours, great training for the Fling (8 weeks and counting). 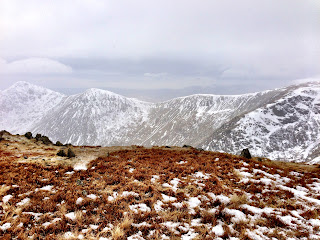