Over the years I’ve supported several Bob Graham Rounds, all of them successful and all of them I have thoroughly enjoyed being part of.  I have been asked numerous times if I was going to attempt one. My answer has always been no, as I thought the challenge would be too great both physically, mentally and logistically. Having done some ultra trail races, this challenge seemed quite daunting because of the 27,000ft of climbing over the 66 miles. The distance wasn’t an issue, it was the relentless up and down. In truth, I wasn’t confident that I could do it. But there was still a part of me that really wanted to try!

I was bimbling along in 2018 doing lots of road races, all short and fast.  Although I was doing quite well and achieving “PB’s”, I wasn’t fulfilled. It became monotonous, aiming for an improvement of a few seconds here and there and putting in too many miles for such a small gain. What did it matter, I wasn’t achieving anything that would give me satisfaction. I was also carrying a groin problem which wouldn’t go away (over 12 months). I needed a challenge to aim for. I said to myself, if I aim to try a Bob Graham then I need to do it the right way. Train hard, recce the route, and become as conditioned as I could to give myself the best possible chance of succeeding.

Six months prior to my attempt I radically changed my training and hooked up with Tony Holt (runningrevival.com). I set out my goals, number one was the Bob Graham round. He set me up with a specific training plan to stick to. I committed to the process. Very few people knew I was planning an attempt, and that’s how I wanted it to be.  It’s a personal thing so I asked if it could be kept between the support crew.

I drew up a list of people I wanted to be involved and went about recruiting their services. They were:

I was pleased the response was positive so the planning began.  We had some good times on recce’s of legs 2 and 3. Not so good on leg 2 when Mr Clarkson decided to go back up Sticks pass for some extra mileage on the return to Threlkeld in the pouring rain…….with my car key! I’m sure his ears were burning. I took a look at Broad stand on the leg 3 recce and decided I’d give it a go if conditions were dry.  Kevin Bray offered a rope on the day for which I am very grateful and it was reassuring that I had it as backup. Broad stand isn’t something to take lightly, especially if you aren’t a fan of heights.

There were plenty training days in the Cheviots, some grim memories of the Cheviot Pendulum route with a 10kg backpack in the snow and wind with sleet sand blasting the legs. All good training though, eh?

The attempt was drawing close. I had informed some close friends (and family of course) of my attempt if they wanted to follow my tracker, still keeping it low profile until after it was done. The week leading up to it I arranged my food, clothes etc so I wasn’t rushing around at the last minute, using up valuable energy.

On the day before the big day we arrived at Thornthwaite campsite early afternoon. The plan was to chill, stay off feet, eat and try and sleep. I certainly didn’t sleep. At around 11:15pm we set off for Moot Hall. Conditions were dry, breezy and cloudy. Midnight came, then the countdown began. We were off at a steady pace on a clockwise round. It was here, all the months of planning geared toward the next 24hrs. The climb up Skiddaw felt good. The visibility became very poor, so much so that headtorches weren’t beneficial. Rob has a hand torch which helped. We did miss the summit, however, so had to backtrack a little. The wind was quite strong at this point.  We claimed the first peak and headed to Calva. I was feeling good, trying to enjoy the experience. We descended from Calva through the heather as it’s much more of a direct line to the river and Mungrisdale common. I had no idea of time and made it clear that I didn’t want to know whether I was up or down at any point. It’s a slog up to Blencathra, more so when you can’t see anything, but we finally reached the top and descended Doddick. We arrived at the cricket ground at Threlkeld where I was greeted with a coffee and some cold beans. A sock change later and we were off on leg 2, munching a rice pudding on the way.

The clag hadn’t lifted at all until Dollywagon. My mood was low up until that point and I wasn’t feeling too good after the food at Threlkeld followed by a big cimb up Calva.  All of a sudden there was a break in the clouds. It was like a shot in the arm, my mood lifted and it gave me a massive boost. So much so, I was hammering it down Seat Sandal down to Dunmail. Lee and Mark were there ready and waiting. I ate some beef and veg stew and set off up Steel Fell.  Shortly after I had my second bad patch. I was nauseous for about an hour and was struggling to eat or drink anything. I knew it would pass eventually so ploughed on, slowly. Emma and Tony met us at Esk Hause with the offer of coke etc but I couldn’t face it. Mark offered me some haribo jelly men, they were good! A tangy taste which seemed to help. Thanks Mark! We were nearing Broad stand when Mark sprinted ahead to assess the rope situation. By the time I got there, he was already up and the rope had been lowered. I tied it around my waist and started to climb up, knowing I was secure if anything happened. Before I knew it we were heading to the top. The descent on the scree was fun and we reached Wasdale to a cheer from the support crew.

Top change, sock change, talc, some food and a coffee did the job.  Another quick turnaround and off up Yewbarrow. There was some good, entertaining chat from these guys. I wasn’t eating much and Jonny had brought along some boiled potatoes. I couldn’t face any. Andy had small pieces of chorizo and cheese. They were delicious!!! A different taste to all the sweet stuff I had eaten was refreshing. Jonny was persistent with his potatoes. I felt bad for saying no each time.  I eventually said yes, his face lit up with a beaming smile. Then I said I was only joking… he looked crushed.

Leg 4 weather was great, really warm and sunny. It didn’t seem to last that long and soon it was over. We descended to Honister knowing there was only one leg to go. Almost there. Katherine and Emma joined me for the last leg. Three more peaks and a run along the road to Keswick. The three peaks ticked by nicely, stopping for a few photos on Robinson. As soon as we reached the bottom track before the road, I put on my road shoes. They felt amazing. I was off, probably too fast. After about two miles I was done. I had to walk/jog. A few of the others met us at Portinscale and I just couldn’t get going until the Main Street.  Seeing the finish gave me the energy to run. I still didn’t know the time, I misread the clock on the hall as 19:40. Which I would have been amazed by. It was actually 19:11. Unbelievable. We had done it. I celebrated with a beer, only two sips though. It lasted me all night. We arranged to meet for breakfast the following morning. It was a nice way to say thanks to everyone for their support and time they put in to help. I will be forever in your debt!

Looking back, I have great memories.  Not only of the day, but of the journey getting there.  I didn’t want the day to end, spending so much time in the hills with your friends makes such a difference.  I couldn’t have asked for better support.

Thank you everyone! You know who you are.

Tony Holt's amazing film really gives you a feel for the experience https://youtu.be/C2LWgqdFSR8 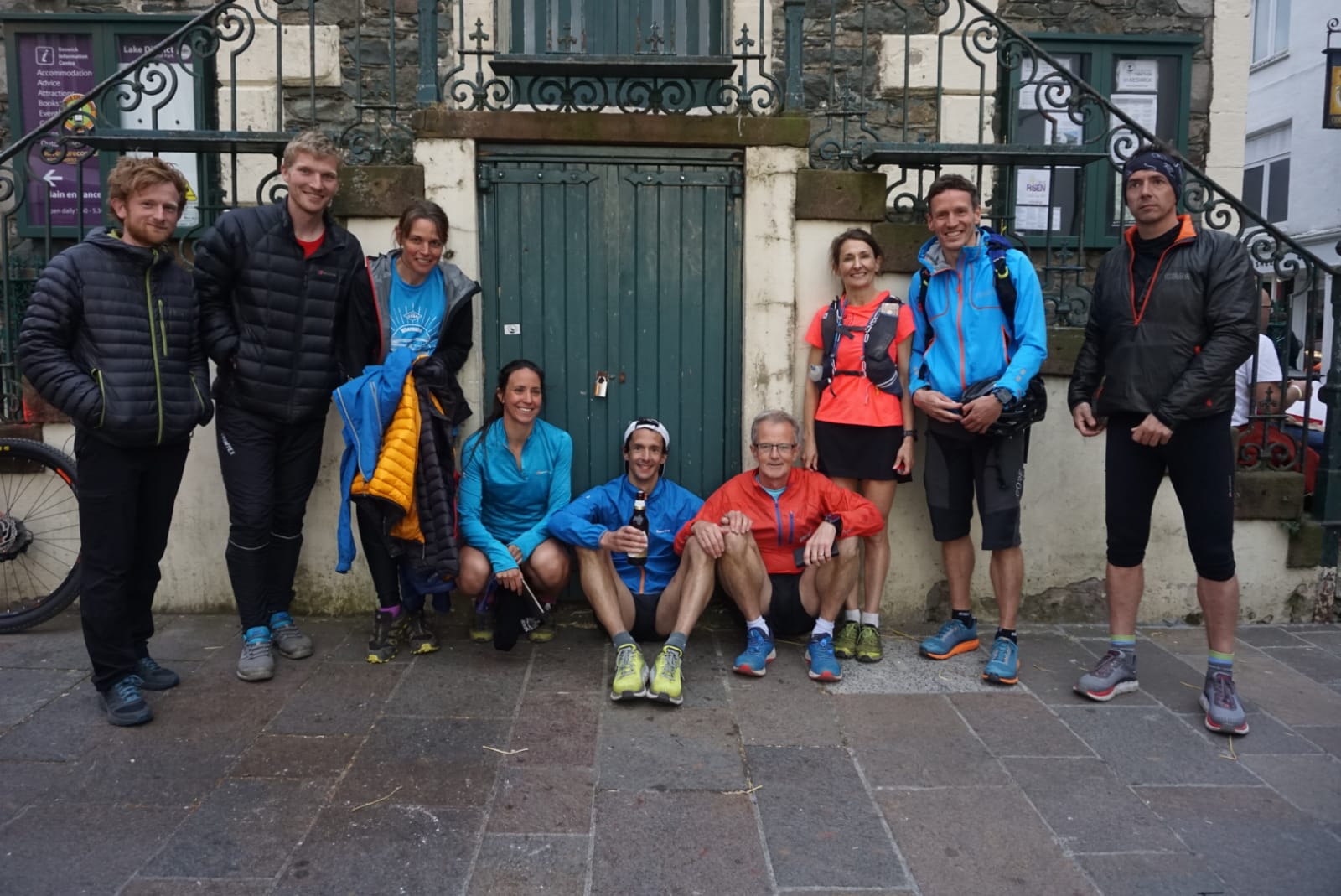