Heading for East Cramlington at around lunchtime today I was reflecting on the last time I actually competed in a cross country. I was astounded by the realisation that it was over 20 years ago!!!

Nevertheless I was quite looking forward to it knowing I would be starting in the slow pack so there wasn't really a great deal of pressure. Fellow team mates were advising not to finish in the top 30 as it would mean promotion to the medium pack for the next year and a half. This could influence team results and also mean I'd be pressured to perform at a higher level in future races.

The weather was cool but the drizzle that had started back home in Morpeth had stopped by the time I reached the venue.

I met up with a few of lads from the club and we did a recce of the course as a warm up. I knew that there'd be 3 laps which is not my favourite format for a race. Knowing exactly where you are at any one point doesn't appeal to me in the least!

1:15pm and we all made our way to the start (well the slow pack at least!) I was amazed how many competitors there were for one pack so I became a little concerned.

The gun went and we were off. I got a good start and felt quite comfortable for the first mile, doing more overtaking than vice versa. The ground was very firm due to the recent dry spell but my new inov8 fell shoes performed brilliantly. I am looking forward to wearing them on my next fell race. Very light and flexible but also very responsive! 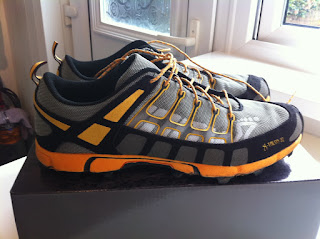 The first lap went well and was getting into a rhythm.  The second lap didn't feel as fast but my GPS told me otherwise.  Perhaps I was thinking too much about who was behind me.  The third lap was more enjoyable.  I upped the pace a little aiming to finish strong.  I crossed the line just under 37 minutes.  I knew I was around the top 30 so I was resigned to the fact that I would probably be promoted to the medium pack.  Officially I finished 24th so I was very pleased in a way.
Looking forward to the next one but hoping to get up the eyes, just how cross country should be!
Posted by Fellrunner1975 at 07:49