NEHL number 2 today (29th October) and it was not enjoyable!

I have had a good week training, 2 rep sessions at the club and a couple of easy runs.  I was all set and looking forward to the cross country.  I was already aware that I had been promoted to the medium pack after finishing 24th at Cramlington.  This didn't really worry me as I knew I'd be chasing rather than being chased!

This was my first visit to the Farringdon course and once we arrived we set off to do a partial lap to get a feel for it.  My first thoughts were "it's bloody narrow"!  There were a few challenging climbs too but they were going to be the least of my worries.

I got prepared for the race and reached the start line at 1:15pm as instructed.  The slow pack lined up and I was amazed by the mass of runners in one group!  Then the penny dropped..... it's going to be hell trying to overtake the stragglers on such a narrow path.  The slow pack set off and the medium group stepped forward, a little thin on the ground. 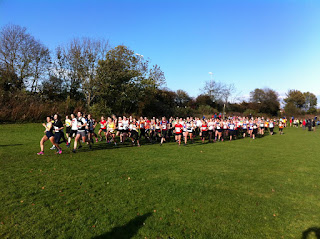 Half way through the first lap I began picking off the slow club runners meandering about the course having conversations with their club mates and blocking the path.  This infuriated me so much I just barged through one couple.  As I progressed through the field the crowd became more dense and I was really struggling to get into any sort of rhythm, leaping over the verges and getting nettled on numerous occasions.

This continued up to lap 3 and by this time I had given up hope of notching up any sort of decent time and even thought to myself that I was wasting my time.  This was confounded by the look on my face when I crossed the finish line and a club mate said "god you look pissed off!".  He was right.  I wish you could demote yourself to the slow group!

Nevertheless, I have done my bit for the club and will now focus on the Derwentwater 10 next week.  I have been looking forward to for some time now.