It was a toss up between running this or the Simonside Cairns fell race on the Sunday. I felt obliged to do this as someone had put my name on the list at the club and discovered that the club pay a £5 entry fee for each athlete. A shame really as I thoroughly enjoyed the Cairns race last year. 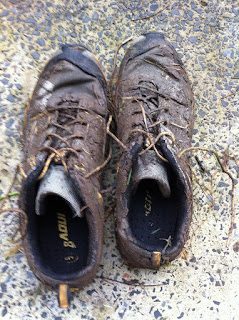 Having run this course earlier in the year at the harrier league I knew what I was in for. I turned up at the club tent to get my number then tootled off for a recce with some club mates. Firstly the course was to be run in reverse, secondly there was a substantial extension to the route. There were to be 3 laps for the senior men.

I had a reasonably tough week following the Hexham Hobble the previous Sunday, trying to reach my target of 40 miles per week. I was feeling heavy legged and lethargic on the warm up. There had already been a few of the youth's races run so the course was pretty rugged, pleased that our race wasn't last on the schedule as it would have been horrendous underfoot - more so than it was! 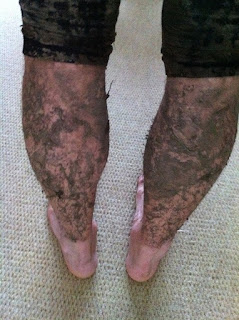 Yet again I went off too fast and faded on the second lap. One of the lads from the club zoomed past me which gave me a rather deflated feeling. Instead of kicking on I let him past. The condition of some parts of the course were extremely boggy and it was hard to get any kind of grip.

I began to get my rhythm again on the third lap when another club mate past me. I was not happy so I dug deep and tried not to let him get too much of a gap, then yet another club mate past me. The last 800 metres on the last lap were fast as I was determined not to let him beat me.
I get the feeling I was half asleep during the race and unable to respond like I usually do. Not my greatest race - lesson learned: DO NOT GO OFF TOO FAST! HOW MANY TIMES HAS THAT HAPPENED!