I have been looking forward to this fell race for some time and it didn't disappoint. Weather forecasts weren't too bad leading up to this morning but this is Northumberland.... it can change very quickly, especially in the hills. 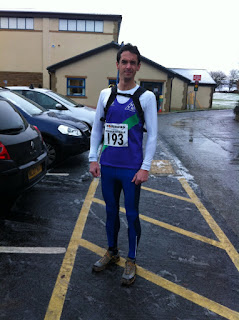 On our way to Allendale for registration there were some flakes of snow in the Newcastle area turning off the A1 onto the A69. This didn't worry me as I could see in the distance that the skies were clear. It was a cold day around 5 degrees.

Turning off the A69 up past Langley castle there were cars descending covered in snow. Uh oh! The temperature was dropping 0.5 degrees every few miles and by the time we reached Allendale it was down to 2 degrees, nippy!

We arrived with around 20 minutes to spare so got our numbers, duly filling out our personal details on the reverse in case anything happened. We got changed and went for a little warm up jog in preparation for the start.

There was a decent crowd at the start, around 150-200 runners all wrapped up well with gloves and some very loud headwear! Waiting for the gun to go off there were some complaints as the ground was waterlogged and feet were becoming numb even before the run!

The first 2 miles were quite tough, long climbs up onto the Hexhamshire common. The snow was coming down and there were a good 2 inches lying on the ground. In fact the views all around were of white fells. Hands were becoming numb, big toes were losing their feeling. Not only was there snow but there was a lot of standing water and the peat bogs were overflowing.

I had a reasonable start and was in the top 30 or so, just trying to concentrate on my own running rather than what other runners were doing, which has been my downfall in the past.

Miles 3-6 were quite easy going, there were a few stretches of good underfoot running where I made up some time. The snow was coming from behind but I knew it would be face in shortly.

Miles 6-8 were tough, wind and snow smack in the face, I couldn't physically see at certain points. I tried to huddle in behind another runner for some protection. The last of the "big" climbs was over, a tough three quarters of a mile ascent. I kept going believing that the worst was over.

The last 1.5 miles were great. This was where my I could apply the work done in effort session and it paid off. I made up several places on the descent into Allendale, my last mile was 5:50. 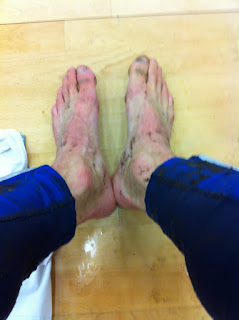 I crossed the line and was pleased to finish 22nd with a time of 01:22:42. And I wasn't particularly exhausted, more freezing cold. My hands, face and feet had no sensation and I struggled to open the car to get my dry kit out.

I managed to get my gear and went to the hall to get changed. A rather helpful lady got me a hot cup of tea so I could de-ice before getting changed. 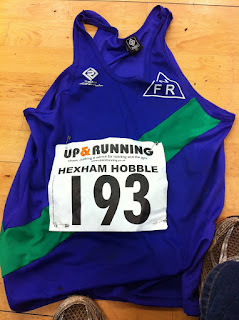 Once dry and in dry clothes I was greeted by a plethora of cakes! Well earned.

A bonus from the day was I won a spot prize at the presentation, a brand new running belt. Result!!

Looking forward to the next fell race, NE XC next weekend though!
Posted by Fellrunner1975 at 11:51