Had a great day out on Sunday (20th May) over in the Lake District "competing" in the Borrowdale Trail Half Marathon. Advertised as a trail run, it was more like a fell race climbing up Watendlath. My GPS indicated a total ascent of 3,500 feet and it felt like it! Weather was fantastic. 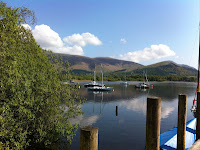 The first 5/6 miles from the start at Nichol end marina right through to Grange was good running with some undulation but once we passed Rosthwaite and ascended Watendlath it became a lot more challenging. Nevertheless, I enjoyed the run and I'm still trying to get the stiffness out the legs! 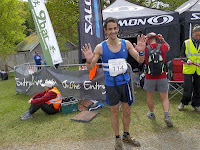 The trail run was on the last day of the 5 day Keswick Mountain Festival. Triathlons, swims and lots of other activities were going on. Will probably try something different next year. Great atmosphere!

The dodgy ankle survived the race but is still quite sensitive. The achilles is improving.

I loaned a mountain bike from a friend a couple of weeks ago and i'm really enjoying the change from just running. I've even had a trial run cycling to work and back (30 miles round trip, under an hour each way). Enjoying it so much I've just ordered a road bike and aim to cycle to and from work at least once per week. Going to make sure it doesn't interfere too much with my running though! It is allowing me to rest the ankle.

Blaydon next in under 3 weeks. Hopefully I can put in a respectable time, not counting on it though.
Posted by Fellrunner1975 at 12:36