My first “Lakes classic” fell race was to be in one of my favourites places - Borrowdale. The weather forecast indicated that we could be in for a very wet race accompanied by a lot of heat and thunder. It turned out to be dry throughout, although it was very warm and humid.

I had been studying the route for several months prior to this race trying to get a feel for how tough it would be. The elevation profile was very daunting. I also looked at past reports from the race reading about others’ experiences. 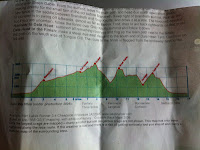 I was out to enjoy it more than anything as I’m still on the road to getting back to full fitness.

The race was a counter for the English Fell running championships this year, so upon arrival I wasn’t surprised by the amount of cars in the field car park. I parked up and trotted off to get registered.

The start was quite narrow for the first half a mile or so, queuing to get through gates but it was fairly easy running all the way to Bessyboot. The sheer gradient of Bessy meant it was a hands on knees job, occasionally on all fours clambering up to the summit. That was one climb over, only several more to contend with. Not least Scafell Pike.

The ground was quite dry and firm apart from the obligatory bog littered around the place, which made it quite difficult to avoid dipping a leg in here and there. The terrain from Bessyboot up to Esk Hause and on to Scafell Pike was varied. Negotiating boulders and sharp edges certainly exercised the ankle joints. Having to concentrate so much on where the feet were landing does take it out of you and unfortunately you can’t appreciate the fantastic views all around.

This was my first ascent of Scafell and there was something endearing about being on top of the highest mountain in England. The descent was unbelievably treacherous. The pressure on the quads all the way down on the scree made the legs burn, I have never descended anything so steep and slippery with high risk of injury. Yells of “below!” were ringing out to warn runners further down that a rock had been displaced and was on the way to meet them. 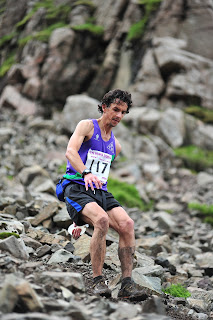 Great Gable came next and it seemed to go on forever. By this time I was chomping on jelly beans and cracked open an energy gel. Looking back at Scafell was a fantastic view. The legs were beginning to suffer now but I was still in good spirits. 10 miles done, 6 miles or so to go.

I reached Honister in around 3hrs 20mins, well in advance of the cut off point. With only Dale Head left to negotiate I was hopeful of a sub 4 hour finish. Wishful thinking! I topped my water bottle up from the kind marshal’s stash and made my way up. About 200 yards later cramp began to set in. The adductors were in pain and I had to stop to do some stretching. Looking at the elevation profile, Dale Head looks no problem compared to the other climbs but it was just as tough. Reaching a crest then seeing that there was another in the distance was pretty demoralising. This happened a few times on the way up. I finally made it but the descent was just as slow and just as bad on legs. So, it took over an hour to get from Honister to the finish. Disappointing but very pleased to have finished. 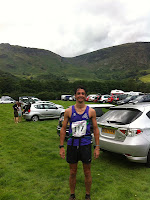 A great event organised by some great people. The support on the course was fantastic and I thank everyone involved. The tea and sandwiches at the end were very welcome (after a scraped myself up off the field). Ben Nevis is next, I can’t see it being as hard as this one though.