I had a great weekend up at Fort William for this year's Ben Nevis race, my first! The weather on departure was warm and dry but by the time we passed Edinburgh the clouds and rain set in. 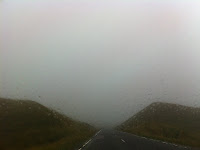 We arrived at the bunkhouse at just after 5pm so we checked in and went for some bait. The forecast for the race was to be high winds and low visibility.

On Saturday morning, after very little sleep, I checked in at registration then headed back to the bunkhouse to relax and to take on fuel.

Before the start I chatted to a couple of NFR's who made the journey up. David Armstrong and Billy Fraser (who both had great races). The first mile of the race was at a quick tempo along the road to the foot of Nevis. I got through the gate and then we were climbing for what would feel like an age. I did worry about wearing a long sleeve baselayer at the start as it was quite mild but I was glad of it when we reached the top.

The first half of the climb had some tough areas but it was once we passed the waterfall and left the walker's path the race became a long slog. 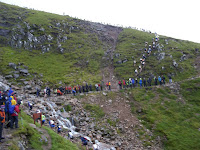 The terrain changed from peat to stones to rocks to scree. All sorts. My back was aching from hunching over so much. The temperature began to plummet in the last section before the summit so I reached for my trusty Newcastle United beanie and gloves. The "Ice cream" headache was well on its way.

I handed in my token to the fantastic marshalls at the top (who deserve tons of respect) and began the descent. I was alarmed to see mountain rescue in the next few hundred yards tending to a runner who had obviously taken a nasty fall. The helicopter could be heard minutes later. It would be very easy for something like that to happen with the conditions and the speed of some descenders.

I reached the road back to the sports field with my legs feeling like lead but was buoyed on by the spectators. Great support! One lap of the field and I was done. 2 hours 27 minutes, not too shabby I suppose.

Needless to say I enjoyed a pint in the evening at the presentation where there seemed to be awards for every conceivable category going. A great turn out though and met some really nice people.

After a few miles on relatively flat terrain in the morning, we headed back on a long drive home but I was glad I was the passenger. Legs still feeling battered, off for a gentle jaunt.
Posted by Fellrunner1975 at 05:55