Four months of preparation and finally the day came for the Hoka Highland Fling Ultra marathon. I have been looking forward to the challenge of this race and running the equivalent of back to back marathons on a fantastic trail from Milngavie to Tyndrum - the first half of the West Highland Way.

I set off on Friday morning, reaching Milngavie at around 2pm after a couple of train journeys. The weather was fantastic, a cool and clear day.

I had a wander around town waiting for John, Mark and Simon to check into the hotel, mainly trying to relax and not think too much about the race the next day.  We registered for our timing chips in the evening followed by a carb-load meal and an early night.

I had pre-prepared my drop bags at home to save any last minute stress. Not having done a race of this kind before, I was experimenting with the types of food I would need on the course so I packed a good mix of sweet/savoury/gels/flat coke etc. Better to be over prepared.  As these were already sorted it did make things a lot easier.

After a terrible night's sleep thinking about every possible scenario that could happen during the race, I was up, changed, packed and munching on a porridge pot/banana combo within a matter of minutes.

Immediately after checkout from the hotel it dawned on me "where's my timing chip?". I had forgotten all about it.  Where could it possibly have gone?  I rushed back into the hotel checking the room while a mate checked my bags.  No sign of it.  There was no option but to run to the start and try and get a spare.  It completely took my mind off the race.

I managed to get a spare chip and with John's help got my drop bags packed into the awaiting vehicles.  Within 5 minutes we were being briefed for the 6am start.

Once we were off I settled in to an easy trot, holding myself back from going out too quick.  This is a long, long race!  The conditions were cool with the sun slowly making an appearance in the distant hills.  Beautiful.  I had no idea how many people were in front of me at the start and wasn't concerned about the runners going past me for the first 5-10 miles.  I was focussed on what I wanted to do and trying to live in the moment, to try and enjoy every minute of it.

The first section to Drymen (12.6m) was easy running and made more relaxed by exchanging a few words with other runners.  I was carrying two small holster bottles from the start then picking up a handheld bottle from John at Drymen.  First loo break followed soon after, a good sign that I was hydrated enough.  Just keep it flowing, small amounts but regularly.

At the top of Conic Hill we passed the bagpipes and were welcomed with spectacular views of Loch Lomond.  I couldn't help but get a photo or two before the descent down to Balmaha.

First drop bag was collected very quickly at Balmaha (19.7m).  I grabbed a couple of gels, a bag of mini cheddars, the rest went in the bin.  Water bottles were topped up and I was off along the shore of the Loch towards Rowardennan.  The trail became a little more technical and undulating but it reminded me of my local route through Bothal woods - just much longer!  At this stage I was feeling good, legs were strong.

I think I stayed too long at the next checkpoint at Rowardennan (27m) and lost a few minutes faffing about not really convinced about what I wanted to eat.  I inhaled a banana and again grabbed some gels and mini cheddars.  The banana went down really well, but gels were becoming sickly and unappealing!

I carried on for the next couple of miles with very heavy legs.  This was the first time I had gone past 28 miles and from this point on it was new territory.  I walked the climbs and ran the flat and downhills.  Another runner caught up to me who I recognised and began to have a chat.  This took my mind off the bad spell I was having and after a couple of miles my legs were back to normal.  Still tired of course but felt much easier.  Thank you Dave T for that 20 minutes or so, it really helped.

The trail from Inversnaid (34m) was very tricky in places with some rock scrambling, carefully negotiating each step.  It would be so easy to get injured, concentration was key. At around mile 40, just before Beinglas Farm checkpoint, I thought I was hallucinating.  Chris W, my coach from Morpeth Harriers appeared from nowhere!  I couldn't believe my eyes, it was a great boost - thanks Chris!

Beinglas Farm (40.9m) was the last checkpoint.  I picked up my drop bag not really sure what I was looking for.  Unfortunately Simon had dropped out at this stage with calf issues.  I gave him my cheese sandwich, drank the flat coke, took out a bag of salted crisps and binned the rest.  12 miles to go. I had a few gels left and full bottles.  The next 12 miles were going to be very long.

The walk/run strategy came into play here, hiking the uphills and running the rest - albeit slowly. I was passed by a female runner who complemented my running style - it may have looked effortless but believe me it wasn't! The forest section at 47-49 miles was relentless.  It was at this point when could feel myself getting light headed. One gel left in the pack, straight down, no messing about! 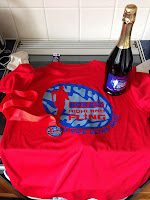 I saw John with 1 mile to go and gave me some encouragement.  (The dirty look wasn't aimed at you John, I was just shattered!)  He took my bumbag which gave some relief.  Knowing I had less than a mile to go gave me a boost.  Turning into the last straight to the finish the atmosphere was great.  I even put in a sprint.  The sense of achievement after crossing the finish line was overwhelming.  9 hours 22 minutes of running (mostly).  A canny shift.


A big thanks to everyone! Especially my wife for putting up with me during the ups and downs of the past 4 months.

Things I have didn't work:
Carried too much stuff
Took too much food
Try some different gels
Spend less time at checkpoints
1 hand held bottle is suffice

For my first ultra, I'm very happy. 39th out of 416 finishers.  It's true about how so much of it is mental. It would be so easy to throw the towel in when it gets tough but if you can grind it out through the bad spells you're well on the way to success.

The legs aren't too bad today (Monday), much better than I thought they would be.  Quads are quite sore but other than that, no problems.  Having a few days off running, maybe a cycle or two this week to get the legs moving again.  12 weeks until the Lakes 50. Back to training in no time!