Since the Highland Fling, training has been very much up and down due to a combination of a three week old cold and achilles issues. This has interrupted my training and preparation for the Lakeland 50 on July 27th. The achilles has not been happy for some time now, some days are better than others but if it gets irritated it lets me know.

Waking up in the morning like an old bloke hobbling out of bed is becoming the norm. I have been trying all sorts of stretching and exercises to try and relieve the little blighter with some icing and massage but I'm pretty much hoping that it will just go away. The first time I had developed achilles tendinitis was after the Great North Run in 2011. It eased after a few months but has always been slightly tender to the touch. Fingers crossed it'll sort itself out with regular stretching. As I type this I have had a good day of zero pain


I entered the long Duddon Fell race back at the beginning of June as it was a Northumberland Fell Runners Championship race. I wanted to give the champs a good crack this year after 2012 was blighted with anaemia and injuries. I thought it would be tough with being a lakes classic but found it much tougher than Borrowdale the previous year.

18 miles with 6,000 ft of climb, with a 3 week old phlegmy cold and a sore achilles, was not ideal and I did suffer after about 12 miles. Let's just say I wasn't the happiest when runners began to stream past me. What rounded the day off was when I fell into a bog literally 400m from the finish. A hot summer dry day and I hobble in dripping with mud. I chose to write off the race, but happy that I had some points on the board.


This week I was contemplating the Humbleton Fell race, bearing in mind I had a Lakes 50 recce to do the next day. I took the decision and went for it. The race is held at Haydon Bridge and this 5 miler is a little gem. Just short of 800ft of climb and it's pretty fast, especially the downhill finish! I rocked up in my soon to be sold Mini Cooper and paid my six quid for the pleasure. It was a warm night with little wind. A great turn out, around 60 runners and quite a few from NFR. I was around 4th/5th after the first mile and conscious that I should ease into it. 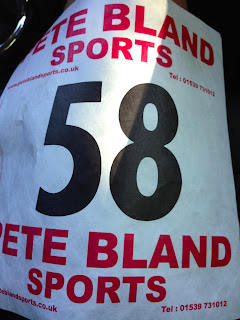 Works pretty well! The leader from NFR was out of sight by this time but I plugged away sticking with 3rd and 4th. We reached the top and went straight on, little did I know it was the wrong way! I heard a shout from behind, they turned left. "oh hell!" This was a shock to the system so immediately turned around and increased the pace to try and get back on track. I was in 4th at this point. I got my number slashed with a red felt tip at the checkpoint, turned and ran hard downhill for the last couple of miles. There was a lot of too-ing and fro-ing with positions on the descent and when we reached the road I thought I was in 4th with the NFR a convincing winner. I crossed the finish line and was told I was third (1st for NFR) as the leader failed to reach the checkpoint. This boosted my confidence after the Duddon race. A great little race and superbly organised. A bottle of red for third place and a bottle of beer for first team.

On Thursday, after a nettle stinged sleep, I was off to the Lakes to do the final recce of the Lakes 50 route taking in Howtown to Mardale Head (9 miles). I met up with a mate at Mardale Head car park and discussed the route. We decided to hop up a few Wainwrights while we were there so headed up to High Street. The weather at home was clear and sunny but in the Lakes it was hazy and cloudy. At least it wasn't torrential rain. I really enjoyed the climbing and the run to the start of the L50 leg. Quite a bit of hillage and good company.

We reached Howtown with a few thousand feet in our legs and headed up Fusedale valley. The weather was quite sticky and a lot of moisture in the air. The climb up to High Kop was pretty relentless, climbing on and on. Pretty sure at this point during the race it'll be more of a hike than a run. The descent to Haweswater was a tricky one to make sure we get it right on race day. We negotiated this quite well and headed along the shore of Haweswater for the next 6k or so. It went on and on and on! It was probably the amount of climbing we did before the section but the legs were very heavy at this point. Midges were attacking every bit of exposed flesh. I'm still paying the price! The view and the area were serene. You could hear a pin drop.

The lake was like glass. Perfection. We reached Mardale Head car park after around 5 hours with a sense of achievement but also aware what awaits from this checkpoint. Gatesgarth Pass. Bring it on...... 5 weeks to go.