I travelled over to Keswick with a couple of lads from the club for the 52nd Derwentwater 10m road race today (6th November).  It was a very cold start to the day having to de-ice my car before departure but the sun was out and there wasn't a cloud in the sky.
We reached Keswick passing through several large areas of fog, especially on the M6 at Penrith.  But upon arrival the weather could not have been better.  It was around 10 degrees and the air was crystal clear. 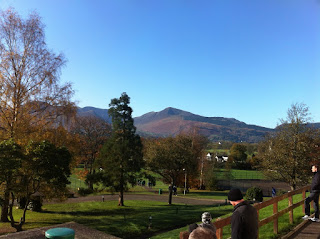 I duly registered at the school noticing that this was the first year they introduced chip timing to the event.  Technology eh!  We had around 40 minutes to kill before the start so we went to my friend Mike's mums house which is conveniently right next to the finish.  We got changed and headed out for a mile or 2 warm up. 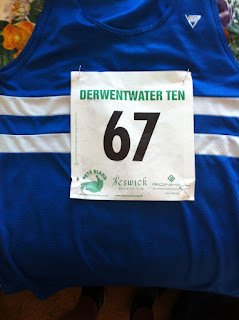 I was pretty pensive about today's race.  Last year I had run 1:07:30 which I knew I could improve on as last year I had just finished the Kielder marathon and all the training that goes with it.  Training has been going well recently.

The first 5 miles are undulating and I managed to get past the Grange in under 30 minutes.  Only thing was the hard part was just around the corner.  This was lingering on my mind from the start but I thought oh well, it has to be done!  I managed to make my way up the climb in fits and starts, grateful for some respite between each climb.  By this point there was nobody around me and I could only just see the next runner in front of me edging away further and further.  The descent was quick, but slippery with all the moist leaves on the tarmac.  I had my racing flats on so there wasn't much grip.

Reaching 8 mile I kept saying to myself that there wasn't long to go, the hard part was over.  The last 2 miles were looooonnnnggg!!

A little support on the home straight certainly gave me some focus and I powered on to the finish.  I crossed the line and was over the moon with 1:00:33.

Homemade lasagne followed by mince pie and cream was most appreciated at Mike's mums!
Posted by Fellrunner1975 at 11:30