The next fixture in the North East Harrier league took me to Blaydon today, on a windy but dry afternoon. This is the first race of 3 in the next 3 weeks with the Hexhamshire hobble fell race next week and the North East cross country championships at Cramlington the week after. This one was the least favourite of the three.

The weather was fairly favourable when I arrived, noticing instantly the increase in temperature from back home in Morpeth. Positively balmy in Blaydon! There was a strong wind but on the warm up lap prior to the race it seemed to be quite sheltered and it was nowhere near as strong as forecast.

I arrived with 30 minutes to spare so headed to the club tent, got changed and tootled off for a warm up. The course was quite flat with a couple of steep but short inclines near the end. 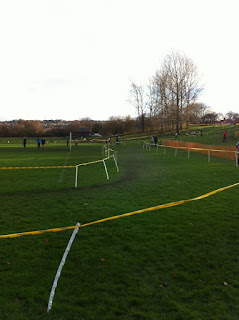 The slow group took off like a swarm of bees after a pot of honey. There were hundreds of them, lots of hustle and bustle around the first corner. I made my way to the start for the medium pack, considerably smaller in size!

The first lap was fairly easy running and I tried to settle into a rhythm and push on from there. I started to catch some of the slow runners quite quickly and this spurred me on for the remainder of the first lap. The second lap was a little harder, my legs felt heavy from Thursday's club session, I should have taken it a bit easier but it's easier said than done. I was making good progress through to lap 3 and even caught an old foe from my Colt's races back in the 80's, making myself feel old now! That was quite satisfying though.

Lap 3 was a bit of a chore, legs becoming increasingly heavier but I was nearly at the end. I finished in 32mins which I was reasonably happy with although I know I wasn't going flat out. It'll be interesting to see the results to see how I compared to fellow club mates who started in the slow pack. 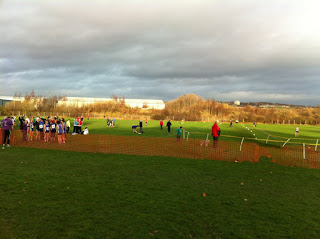 Looking forward to next week's fell race, that's where I am most content, a good fell run!
Posted by Fellrunner1975 at 08:34