It's been 2 weeks since the North Tyneside 10k debacle in which I lost a great deal of love for running. Achilles trouble (ongoing since the Great North Run) and now strained ankle ligaments from a slight altercation with a bog on top of Gisborough moors! Hey ho, on we go.

Since the dreaded NT 10k I've been keeping a bit of a low profile, still keeping my mileage up but trying to get the race out of my system with some long steady runs. I'm still convinced I was coming down with something as I was champion until miles 2-3. 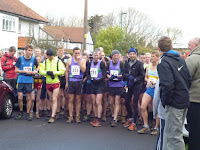 I journeyed off last Sunday for the Gisborough moors fell race, stopping at a mates on the way to drop the car off and cadge a lift. Pleased I did as my thermostat ceased to work and the bonnet on the car was about to blow off! Needless to say that got sorted later.

The race was a very laid back affair, I intended just to enjoy it and treat it as a Sunday run. The weather was cool but clouds were gathering fast! The first mile or so is pretty much uphill through the forest which was particularly boggy this year after the amount of rain we've had recently. Once onto the moors it's a decent run until the ascent to Captain cook's monument. Rain, wind, sleet, snow, sun. All weathers!!

I must admit I was very lethargic again and struggled for the first half of the race, the last 6 miles were fab. Roseberry topping was once a gain a killer! Smooth running, catching people and generally not giving a toss. I must have taken 10 runners on the last descent through the woods. 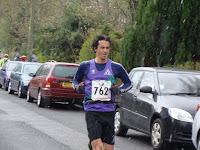 I was fairly pleased with the run, although slower than last year, I was still glad to be back in the countryside enjoying my running.

This week has been pretty much the same, although I did a speed session this morning which was like starting all over again!

Pondering entering the London marathon next year, entries open on the 30th April. Watch this space!

Next race for me is the Borrowdale trail half marathon in a few weeks, oh and the cheviot summit fell race next week (3miles up, 3 miles down). Not fit/sharp enough for any PB's in races before then. Need to get this achilles and ankle sorted before then. Frustrated.....
Posted by Fellrunner1975 at 13:25