The Cumbria Way starts in Ulverston and finishes in Carlisle passing through the valleys of the Lake District National Park.  I became interested in this event as it seemed a low key and friendly day out on the trails through the glorious Cumbrian Mountains.  It was an event to enjoy and have a good day out doing what I love.

The weather was pretty much perfect with a southerly tailwind.  It was wet underfoot from the previous week’s downpours but it didn’t rain during the race.  I felt pretty relaxed leading up to it as I tried to remove all stress from it by having the sole priority of finishing, no matter how long it took or what state I’d be in at the end.  I made that clear to friends and family, I usually stress out before a race as I’m sure lots of others do.  The cut-off times were generous so I was quite confident that if I paced it right then I would complete it.
I scribbled the distances between checkpoints on my hand to mentally help to break down the overall distance.  The race started at 6am and I began at a nice and easy pace through the first section to Coniston (16 miles).  This is a really runnable part of the route, so very easy to overcook it and get carried away.

It was a beautiful morning with a great sunrise. I reached the checkpoint in good spirits, refilled my soft flasks and grabbed a few snacks to eat on the go.  The sun was quite warm during the next section from Coniston to Sticklebarn (11 miles) in the beautiful Langdales.  I made sure I kept drinking and cooling down at the streams which were abundant after the amount of rain during the week. 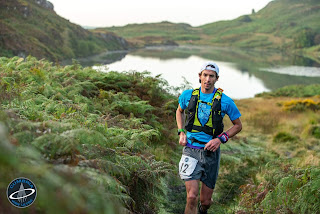 The next section to Keswick (16.7miles) took us over Stakes Pass, a nice steady climb and technical descent towards Borrowdale.  Then along the shoreline of Derwentwater which is again, really runnable.  I met up with my support crew (Emma and Tony Holt) who were a welcome sight. I wasn’t sure where I was position-wise at this point but I was feeling good.  A quick change of top and socks and I was off on the next section to Caldbeck(15 miles) up a familiar route to Latrrigg (Bob Graham Round :o))  Another runner had latched onto me at this stage and I didn’t really want to run with anyone else nor chat to them so I was pleased when he ran ahead.

There was a really boggy section heading to High Pike which was a bit of a chore, or death march!  There were four of us together on this climb, once we summited I gained an advantage on the descent and I was on my own again to the Caldbeck checkpoint.  The volunteers filled my bottles and I was off again after a short rest.  From Caldbeck onwards the route was flat going through farmers fields all the way to Carlisle (15 miles).  By this point I was run/walking, constantly drinking and trying to eat what I could.  The sun had set so I got my headtorch out for the last 5 miles or so.  I passed a few 30 mile racers with 3-4 miles to go and they told me I was third male.  This gave me quite a boost so cracked on (after switching my headtorch off – tactics!) and pretty much ran the rest of the way to Carlisle Castle.  I was glad to see the finish line!  Overall, a fantastic event with amazing support and volunteers.  The course is really well marked and it would be very hard to go wrong.  If you want to give an ultra a try, I would definitely recommend this one!

Thanks again to everyone who supported and the organisers. Particularly Emma and Tony, Gaynor and Amanda who gave me a lift to my car on the Sunday morning 😄 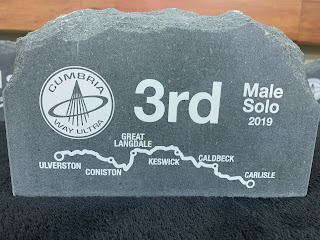